Jesus, Stories and the Kingdom of God

This is the first post in a seven-part series on Four Fields, a Kingdom growth strategy seen throughout scripture in the life of Jesus Christ and his disciples. Read the rest of the series.

There is tremendous power in story.

Stories give listeners a way to connect with other people, emotions, experiences, or gain a glimpse into different aspects of life. During His earthly ministry, Jesus Christ used simple, memorable, and purposeful stories known as parables to illustrate the essence of His message, mission, and ministry.

And Jesus uses parables to reveal to us key insights into the Kingdom of God, the very core of His ministry and prevalent theme throughout the gospels.

Some of Jesus’ first words were the proclamation of the Kingdom of God.

“The time has come,” he said. “The kingdom of God has come near. Repent and believe the good news!” -Mark 1:15

His prayer to the Father was a plead for the Kingdom to come.

“This, then, is how you should pray: ‘Our Father in heaven, hallowed be your name, your kingdom come, your will be done, on earth as it is in heaven.’” -Matthew 6:9-10

The Kingdom of God was His mission.

“And this gospel of the kingdom will be preached in the whole world as a testimony to all nations, and then the end will come.” -Matthew 24:14

His final teachings were regarding the Kingdom.

“After his suffering, he presented himself to them and gave many convincing proofs that he was alive. He appeared to them over a period of forty days and spoke about the kingdom of God.” -Acts 1:3

In T4T: A Discipleship Re-Revolution, Ying Kai and Steve Smith nail it when they say, “Jesus knew that if we could get the Kingdom (King’s reign) right, we would get church right.” If we are not familiar with the ways of Jesus’ reign, then we may unfortunately miss what God is trying to do right in front of us.

The Kingdom of God doesn’t match with our natural tendencies, yet in God’s grace, He is pleased to help us grow in our understanding of it. Many of Jesus’ parables helped listeners gain little glimpses into the Kingdom of God and how it functions.

One of the pictures that Jesus painted with a parable regarded the growth of His Kingdom.

He also said, “This is what the kingdom of God is like. A man scatters seed on the ground. Night and day, whether he sleeps or gets up, the seed sprouts and grows, though he does not know how. All by itself the soil produces grain—first the stalk, then the head, then the full kernel in the head. As soon as the grain is ripe, he puts the sickle to it, because the harvest has come.” -Mark 4:26-29

With this audience, Jesus used a simple farming illustration to reveal a much deeper concept of Kingdom growth. Jesus, alongside His disciples, told this parable and then proceeded to practically live out different key areas of Kingdom growth found within this very same story.

Implications of This Parable Today

In Mark 4:26-29 we see that a simple illustration like a farming process can transcend 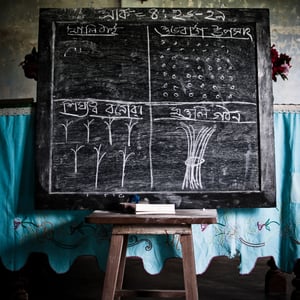 to all peoples at any given time. Through this story, Jesus gives us a glimpse into how we can be a part of His Kingdom’s growth today.

Over the next several weeks, we are unpacking this parable in hopes of sharing insight into how we can tangibly seek continual growth of the Kingdom of God. As you’ll soon see, these “four fields” come together to form a simple, biblical, and reproducible process in which any disciple, including you, can play a role in expanding God’s Kingdom.

Four Fields is East-West’s ministry model that includes entering new ministry fields, sharing the gospel, discipling new believers, gathering as church, and developing leaders to continue this ongoing cycle. Based on The Parable of the Growing Seed in Mark 4:26-29, we believe this strategy is seen in the ministry of Jesus and his disciples and is ultimately fueled by the Holy Spirit.

Continue reading about Four Fields in the next post.