What do Muslims believe?

This post is part of a series on Major World Religions. East-West’s hope is to equip believers with facts, stats, and tips on engaging people of other religions with the gospel of Jesus Christ. Read the last post about what Christians believe.

Although the population of the Middle East and North Africa are 93% Muslim, these regions only represent 20% of the worldwide Muslim population. There are 3.48 million Muslims living in North America. 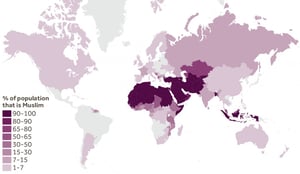 “There is no god but Allah and Muhammad is his messenger.” -Shahada

Islam is a monotheistic religion founded by their Prophet, Muhammad, in the seventh century. Muslims believe the angel Gabriel visited Muhammad to reveal the words of Allah. These revelations are documented in the Qur’an.

The framework of the Islamic faith includes five tenets that must be upheld to enter paradise—Heaven. The Five Pillars of Islam include: 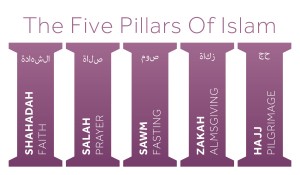 God is at work in the hearts of Muslims around the world. The top four ways Muslims come to faith in Christ are:

With that knowledge, it’s crucial to build intentional relationships with Muslims and show them the love of Christ. Pray for your Muslim friends, and encourage them to explore the Bible. You can trust that the God-breathed Scriptures are living, active, and sharp enough to pierce the hardest hearts.

Long-term Missionaries
By becoming members of Muslim communities—through teaching, coaching, business ventures, and more—our long-term missionaries are able to seek out persons of peace and reach unreached Muslim populations in the Middle East, Africa, and Europe with the free gift of God’s grace.

Short-Term Mission Trips
God is leveraging wars in the Middle East to give believers unrestricted access to Muslims in Europe. As doors continue to open in this region, East-West is mobilizing the Church in America to witness to Muslims in European countries. A movement sparks through these trips as Muslims come to faith, are discipled, and go back to their communities to share the gospel.

This post is part of a series on major world religions. East-West’s hope is to equip believers with facts, stats, and tips on engaging people of other religions with the gospel of Jesus Christ. To do so, we've produced a field guide that provides an overview of some of the world's largest religions and made it available to you as a free digital download.