Sharing the Gospel with Muslims

This is the second post in a series about sharing the gospel with people from other major world religions. You can read last week’s post here.

As the second largest religion worldwide and the fastest-growing religion globally, Islam should be on every believer’s radar. Muslims make up about a quarter of the world population and could outnumber Christians within the next several decades, according to Pew Research Center.

Islam is a monotheistic religion whose worshipers submit to Allah. The religion was founded by the Prophet Muhammad, who Muslims believe was visited by the angel Gabriel to reveal the words of Allah.

As an Abrahamic religion, Islam recognizes the first five books of the Holy Bible—or the Pentateuch—as holy books. But despite this similarity between Islam and Christianity, there are vast differences between the two faiths. And these differences are great jumping off points for sharing the gospel with Muslim friends.

One fundamental difference between Islam and Christianity is that Muslims see Jesus as a prophet, not as the Son of God. Muslims do not understand how Jesus was both fully man and fully God, and therefore believe He could only have been a man.

Christ followers need to establish Jesus’ authority when sharing the gospel as He is the sole hope for salvation. The Bible supports Jesus’ oneness with God.

Jesus explains in the gospels that He and God are One, not separate gods (John 10:30). God also proclaims that Jesus is His Son, and all should listen to Him (Luke 9:35). Because Jesus is God in flesh, He has authority to save.

“Jesus answered, ‘I am the way and the truth and the life. No one comes to the Father except through me.’” -John 14:6 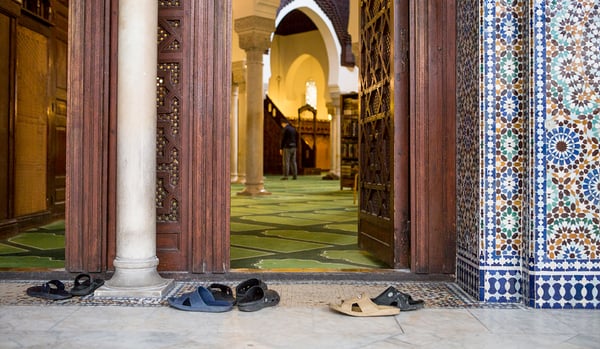 Allah, unlike the God of the Bible, is a distant, unloving god. Muslims do not have a personal relationship with Allah as Christians do with our Lord and Savior.

God is love, and He created all people to love and be loved (1 John 4:7-8). Worshipping a god without love will never fill the chasm within each person’s soul.

Christ followers have great news for Muslims: love can be found in God. Show them Scripture, such as John 3:16, 1 John 4:10, and Romans 5:8. The greatest display of love was Jesus’ sacrifice on the cross—even as He was mocked and beaten—to pay for our sins.

The great blessing of the cross is that the work of salvation is complete; nothing more needs to be done to pay for the debt of sin.

Muslims strive all of their lives to earn Allah’s acceptance, and they believe they will not know whether their efforts were successful until the end of their lives. Christ followers, however, have assurance of their salvation through faith in Jesus (John 5:24).

Many people—not just Muslims—may have a hard time understanding the beauty of salvation through grace instead of works. A great Scripture to turn to is Romans 6:23, which explains that salvation is a free gift. A gift is not something that is earned but rather something given out of love.

Works are still important in the life of a Christian, but they are a response to salvation, not a means to earn salvation.

“For it is by grace you have been saved, through faith—and this is not from yourselves, it is the gift of God—not by works, so that no one can boast.” -Ephesians 2:8-9

Islam can be found around the world, but a large number of Muslims are concentrated in African and Middle Eastern countries. Some of these countries are known for Christian persecution, making it difficult and dangerous for the gospel to take root.

But God is working in amazing ways to bring the gospel to Muslims. Refugees escaping war-torn nations are migrating to Europe and North America, where evangelists have a greater chance of reaching these lost souls with the good news. Muslims have also reported seeing Jesus in their dreams.

Remember to be patient when sharing the gospel with someone who practices Islam.

“My dear brothers and sisters, take note of this: Everyone should be quick to listen, slow to speak and slow to become angry …” -James 1:19

There may be a lot of fear that comes with the consideration of accepting Jesus. Pray fervently that Muslim friends would see that accepting the gift of salvation far outweighs a life without Jesus.