Sharing the Gospel with Buddhists

This is the third post in a series about sharing the gospel with people from other major world religions. You can read last week’s post here.

To share the gospel with Buddhists, it’s important to know the background of Buddhism.

Buddhism is unlike any other major world religion. For one, Buddhism does not have a deity. Its founder, Buddha, is often worshipped and revered by followers, but many do not consider him a god. Second, whereas other religions are expected to grow over the next several decades, Buddhism is expected to decline, according to Pew Research Center.

With 500 million Buddhists worldwide, Buddhism is still a significant mission field for the gospel.

Siddhartha Gautama (Buddha) founded Buddhism more than 2,500 years ago. He was an Asian royal who left his life of luxury to find truth and meaning. After six years of yoga, asceticism, deprivation, and days spent meditating under a tree, Buddha claimed to find enlightenment.

Like Hindus, Buddhists also believe in karma and reincarnation. Buddhists believe they escape reincarnation when they reach Nirvana, an enlightened state that is free from desire.

Because Buddhism focuses on suffering and the Bible speaks heavily on that subject, that is a good place to start a gospel conversation. 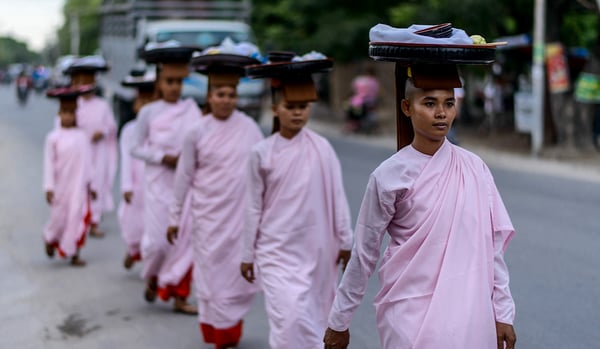 Suffering involves pain, heartache, and misery; it is completely understandable why anyone would want to escape it.

While Buddhists are taught to end their personal suffering, Christians are taught to accept it, even rejoice in it (Romans 5:3-5, ESV). Someone cannot completely escape suffering as it is a normal part of life. Jesus knows this and can relate to our suffering.

The writers of the Epistles explain that suffering can actually lead to good. James explains that trials will lead to perseverance, which will make a believer spiritually mature (James 1:2-4). And Peter reassures Christ followers that God will make those who have suffered “strong, firm and steadfast (1 Peter 5:10).”

The ultimate good in suffering was seen in Jesus’ sacrifice on the cross. His suffering was necessary for the forgiveness of sins.

“But he was pierced for our transgressions, he was crushed for our iniquities; the punishment that brought us peace was on him, and by his wounds we are healed.” -Isaiah 53:5

You can also change the conversation about suffering. While Buddhists believe suffering is caused by desire, Christians can expand upon that idea by explaining sin. Sin is any action or thought that goes against God’s will, including evil desires (2 Peter 1:4). Suffering originated with the Fall and has permeated the lives of people ever since. The only escape is to spend eternity with God in Heaven, which is only possible through Jesus.

“‘Very truly I tell you, whoever hears my word and believes him who sent me has eternal life and will not be judged but has crossed over from death to life.’” -John 5:24

Buddhists rely on their own abilities to reach Nirvana. They must individually overcome suffering, follow the Eightfold Path, and lead a moral life to end the cycle of Karma.

The Bible teaches that people will never be good enough or strong enough to achieve salvation. People are weak so that they can learn to depend on God.

“But he said to me, ‘My grace is sufficient for you, for my power is made perfect in weakness.’ Therefore I will boast all the more gladly about my weaknesses, so that Christ’s power may rest on me.” -2 Corinthians 12:9

Living a moral life is admirable, but the reasons for walking a noble path are different for Buddhists and Christians. Christians live morally in response to salvation, not as a way to earn it. Salvation is not based on what we have done but on what Jesus has done for us. Explain to Buddhist friends that in order to receive salvation, we have to admit our weakness to sin. Relying on God’s leading allows us to live a moral life.

“For the grace of God has appeared that offers salvation to all people. It teaches us to say ‘No’ to ungodliness and worldly passions, and to live self-controlled, upright and godly lives in this present age … .” -Titus 2:11-12

Never underestimate the power of a personal encounter with Jesus. Buddhists do not know what it is like to have a personal relationship with Jesus, but Christians do. A personal testimony about accepting Jesus’s free gift is a crucial tool in evangelism, especially when sharing the gospel with Buddhists.

Many Buddhists believe Jesus is an enlightened teacher, and some think He studied under Buddha. Sharing how Jesus is the Messiah and how He saved your life can open the eyes of Buddhist friends to the true Jesus they’ve never known before.